It sounds odd to say it, but the smaller the particles, the more habitable surface area the char will contain. The International Biochar Institute (IBI) has found that particle sizes less than 2 mm are best. These tiny bits are made up of many tubes which are the vitrified plant cells. Turns out, heating coals 'til they glow is like firing pottery. Not only does the material turn into something like glass, the particles lose half of their size as well. (The charring process shrinks parent material by half as the hydrogen and oxygen, tied up as carbohydrates, are driven off.) When the carbon is heated to between 450 and 500 degrees F (230-260C) in the absence of air, it is transformed forever. See the entry: "Making". This small particle size also allows earthworms the ability to consume the char and have it come out the other end enriched with worm castings! This is what the structure of a particle of char looks like once turned to powder. This image is a scale model of what a 0.1mm (0.004 inches) piece of char would look like. This is still massive compared to most soil microbes. Many refer to char as being like condominiums for microbes. The moisture, nutrients and minerals we add to char are akin to stocking the refrigerators, mini bars and pantries of this massive complex for life. Try as I might, some people just cannot comprehend this living zone under our feet. I understand that it will forever remain invisible, but we can understand what goes on there if we know how to look. I have developed soils that were over 8% organics and when organics in soil get high, many weeds do not grow optimally, especially peculiar is quackgrass, which gets large underground systems that can't even put up a single leaf. It is almost like it is trying to grow toward poorer soil before it even tries to grow anything above ground. Remember though, 90% of the carbon added to the soil as compost is lost in one way or another, within four years. Fully half of what we call soil is either air or water. Soil air, or soil atmosphere as some call it, has slightly less oxygen and nitrogen than above ground air and many times more carbon dioxide in it than air we breathe, again, a result of soil microbe metabolism. Atmospheric carbon dioxide is 0.04%. in soil it can be 0.25% In any case, depending on the water holding capacity of soil, saturation levels, and compaction, soils can range up to ten percent more air, or water, at intervals, it swings back and forth around 25% of each. Most of the remainder is mineral. Up to half of the material is just "dirt", a mineral complex waiting to become habitable. One might imagine parent rock as pure mineral without organic material added in yet. Often it is referred to as bedrock. Fertile soil, on the other hand has this once living carbon component that is residue of life. Soil tilth comes, in part, from this. Fungal hyphae exploit it and turn it into structural elements within the soil complex. The microbes who feed in, on and around these stored reserves flourish and give rise to other trophic levels. Looking at just the tiniest section of the pie chart, the 5-8% which represents the organic carbon, dead plant roots, dead plant residue, dung, dead microbes and other life, etc. we see a community made up of billions of organisms per tablespoon. healthy soil is completely different than dirt. Just considering the tiny fraction of the soil we can control, component by component, further investigation reveals this: Soil microbiome in healthy soil is diverse and contains all these interactive elements. So many epiphitic and filial relations exist between members of the soil community, it is difficult to diagram them all. Each trophic level can concentrate minerals, nutrients and, sadly toxins, to tenfold increase above background levels in their tissues. All parts of this system provide vital resources for other trophic levels. Unlike above ground life, every creature or plant can feed on the others, making them top predators. I was challenged by a friend to create a diagram of the carbon cycle and this is just my first stab at it. Soil carbon as I have diagrammed here, is mostly living or recently living. The tiny bit of carbon biochar adds is less than a single percentage. The rest of the life that goes on, the biome, the active living tissue of billions of microscopic organisms per tablespoon of soil, once consumed or used as resources for sustaining amoebae, ciliates and/or flagellates, however these same soil organisms can feed on the tissues of any of the representatives from any and all other trophic levels. 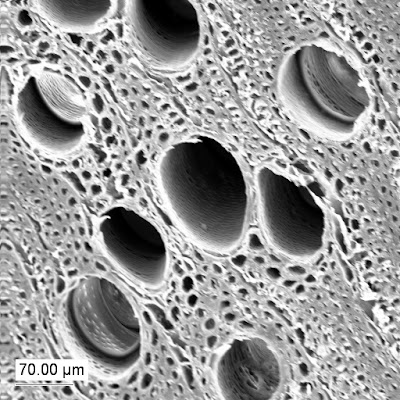 90% of organic carbon added to soil leaves within the first four years, so if you compost, never wait five years to add it to your garden beds or crop producing fields. Soil life depends on dead roots, dead leaves, manure and other organic matter, typically the sorts of things we throw into our compost bins, typically food that would smell bad within a few days. This is exactly the kind of stuff that soil microbes love. without a constant supply of nutrients, like us, they wither and die. What makes biochar different is that vitrified carbon, pyrolized carbon, lasts forever. The organisms who use it for housing don't eat it or digest it, they just use the surfaces within it for habitat. That is, why making the surface area available, by making tiny particles, is worth the effort. Unleashing the power of char takes place when the material is crushed to powder. If you ever see a charred log in the woods, it is almost always virtually sterile. Nothing will grow on it. When the particles are tiny, it becomes possible to saturate it with nutrients and food for life. In a large chunk, there is comparatively little surface area exposed to air, water and nutrients. My feedstock for making char is primarily sawdust. I live in a forest products state and have virtually unlimited amounts of it free. It is expensive to transport away. Making char from sawdust yields small bits that do not need to be crushed to powder or small grains. Perhaps you think it lazy, but really, it is efficient. If there are agricultural areas near sawdust anywhere on Earth, the highest use for them is char production! Get on this human beings, let's make this happen! This is NOT how to do it. Tiny chunks, smaller than gravel are best! 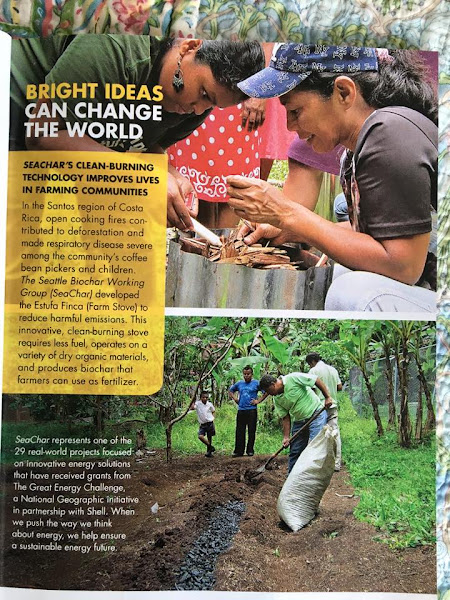 When I heard that a cubic centimeter of char has equal surface area to a soccer pitch, my mind was completely and utterly blown. Looking at it another way, a handful of the stuff has fourteen acres of surface area. Again, mind-blowing. I'm nearly ten years in to my experience with biochar and my mind is still blown when I consider it! When you factor in the ability of microbes to flourish in and on the char, it has even more power to transform soils for the better. Water holding capacity is increased not only because char holds six times it's weight in water, but once colonized by the microbial community, that amount increases because the microbes hold water in their cells as well. When I began, I tried everything to crush the nuggets of char I made. In addition to being dusty as all get out, there were no good ways of doing it. I drove a large vehicle back and forth across a big burlap bag, lined with a plastic bag to catch as much of the char powder as possible, after about twenty times of driving over it, about a quart of use-able char was produced, the rest remained big pieces. I tried a hammer and made some small bits, but many bigger chunks went flying. I even tried a large mortar and pestle, which worked, but is not nearly as romantic as it appears in those movies they show in anthropology class. There is a reason that mills figure greatly into most local lore. Once you didn't have to pound or grind wheat to flour, by hand, things were golden! The tool of choice that I have settled on for smaller areas, garden beds and smaller, is to use a hand grinder for coffee. You can change the fineness of the grind and sub 2mm is easy enough to get with it. You just have to slowly feed chunks into the feed auger, which requires paying some attention to, but, if you are the person cranking the handle, you should not hurt yourself too badly. Please, please, please, do not breathe the dust! Finally, for larger acreages, you can utilize a hammer mill to crush char. Especially if you have acres to enrich, but only logs and large chunks of wood to char. It can be done, but do not breathe the dust! Always wear a respirator if you are going to be around char dust! Another caveat of the hammer mill that is if you try to use water to keep the dust down, the workings will get gummed up. Always remember, what seems tiny to us is cavernous to the microbes we are helping to thrive in the soils we are building. Posted by Bioneer: Tony C. Saladino
Posted by Bioneer: Tony C. Saladino at 8:21 AM
Email ThisBlogThis!Share to TwitterShare to FacebookShare to Pinterest
Labels: habitat, microbes, power, small, territory, unleashing