Ready To Dig In The Dirt

This winter, in my part of the world was noteworthy because four separate times, the Polar Vortex was broken up and arctic air didn't just blast through in a day or three like it normally does, the arctic air stayed for more than a week at a time. We had many weeks where the temperatures here were lower than those in Barrow, Alaska. The first time we experienced it, the sun was not to rise in Barrow for nearly two weeks, but we were colder. We had the awesome Al Roker went after the climate change deniers who claimed that the Polar Vortex was part of a left-wing conspiracy with his discussion about it on Good Morning America. The length and depth of our winter was the worst I have experienced in fifty years, but on the whole, the planet was warmer than ever. For some, this just will not make sense, but the fact remains. Just because the whole planet is warmer, it may have areas that are experiencing record cold, record snow and record rainfall simultaneously. Climate change is as real. more records will be broken and they will be more and more disruptive, we will need to get used to it. Extreme conditions in every measurable parameter are the new normal.

I have a cool tool that allows me to make paper pots for potting soil. It has been out and being used for days now, creating little containers for soil.  It is designed to use newspaper for the container so that it can decompose easily when put into the earth (soil). The brand name on the product is PotMaker. I think it dates back to the nineteen seventies or earlier. 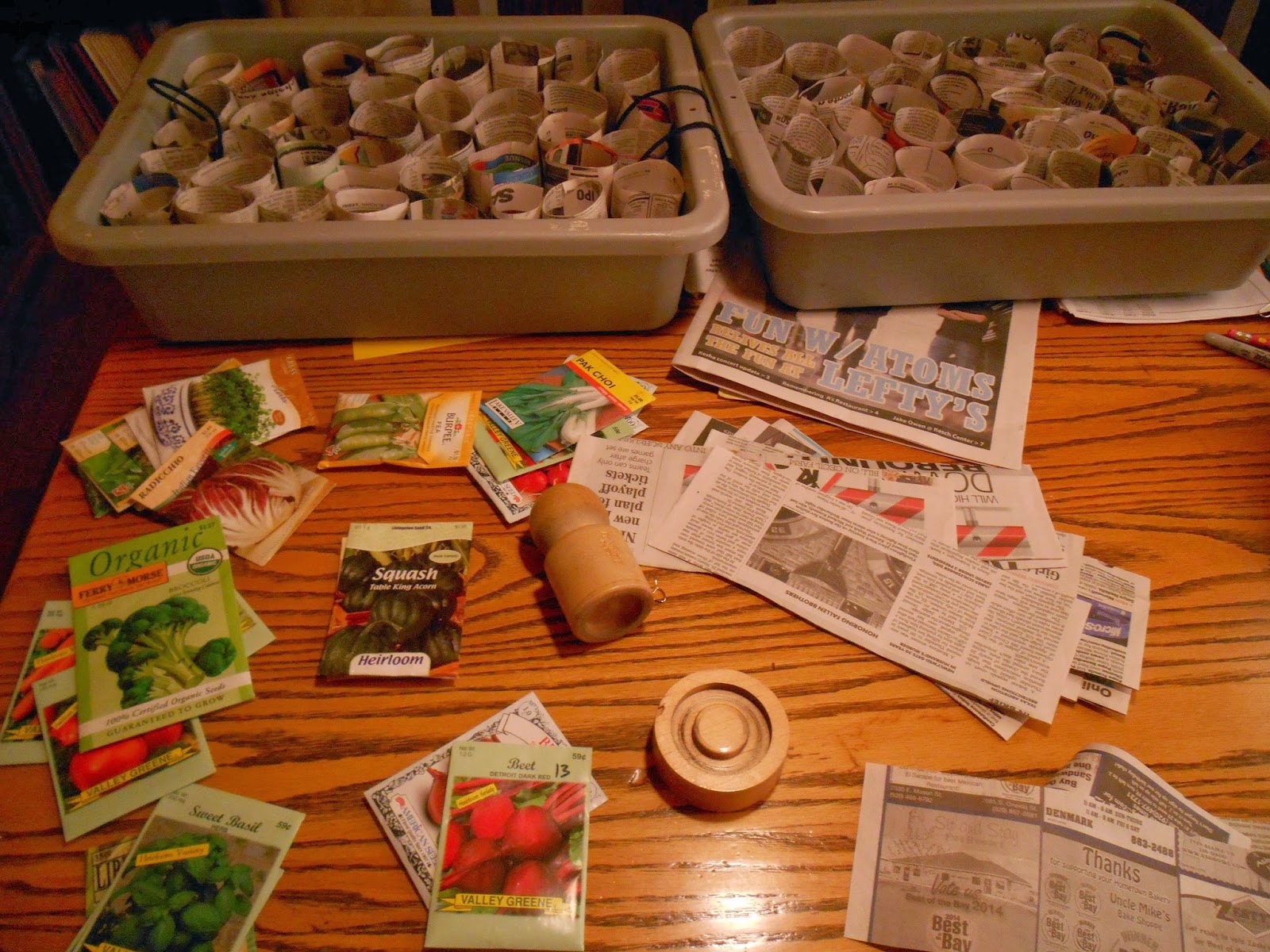 I have used this system before and the only drawback that I can find is if the pots are anything less than full, they are a bit too broad for their depth. This could be less of a problem if the form was a bit narrowerAnother tip, drill (bore) an air channel through the center of the cylinder that the paper wraps around. This will relieve air pressure behind the paper planting cell as you pull it off the form. For trees, let the paper run taller. Another tip, pre-fold the paper that wraps around past the bottom of the form with tight creases before placing on jig for bottom. The cells that this is designed to make are 2.25" (5.7 cm) diameter. It would be interesting to try 1.75" (4.45 cm) or even 1.25" (3.8 cm). especially for deeply rooted seedlings.

That's enough, I'm going to get the wheelbarrow, the thawed earth and sand that I have been saving, biochar,and some potting mix. I'm getting my hands in soil whether the ground is thawed or not! This technology is proven. No one stands to make a million dollars making these widgets, but our future may depend on things like this. Sustainability requires infinite imagination and elegance of design. Having only two pieces that will virtually never wear out holds infinite possibility. Think outside the box is a way of life. It makes future generations possible, but not only that, it enhances them. Live to create positive change for seven generations. If that doesn't make you humble, nothing will. Namaste'

Posted by Bioneer: Tony C. Saladino at 7:56 AM
Email ThisBlogThis!Share to TwitterShare to FacebookShare to Pinterest