My Own One Square Foot ECO-Tour.

I choose to write for just this post about the one square foot or so that I inhabit when I sit down to write. i soon hope to formalize my standing desk, but until that time, when I will only require about one square foot to stand, imagine the one square foot frame of reference, that I wrote of in a previous entry, for the sake of message. We will always have to overlook some discrepancy between what exists and what we attend to, but I digress.

The place in which I sit is on what had formerly been a wetland complex of nearly unimaginable extent. from my house, it extended over eight miles North and west of where "my", (the bank's) house stands now. What once existed here is giant riparian filter, in places, several miles wide. A second vast node of this wetland extended eight miles to the north and east. Between them, these wetland complexes absorbed virtually all of the nutrients being shunted off the land, feeding a very broad food chain. In early days, a rendering concern tainted the waters and shoreline with offal, creating an open sewer. After the river was defiled, a brick manufacturer filled much of the shoreline upon which my house now stands, forever barring natural regeneration.

The exact square foot that I inhabit has been dug out of the soil profile to a depth of about six feet without reaching the bottom of the fill. that means at some time before "development" my feet would have always been wet, because the water table here is just below six feet, yet we had not yet hit the bottom of brick-laced fill. Well before this was divided into lots, there had to have been muskrat, beaver, and every sort of creature that could have been around to have been around, because thousands of years of unbroken history were laid out like an interwoven complex buckyball of relationship.

The spot on which I write is known to be outwash, or glacial till, down to a few hundred feet, but beyond the deepest drill-hole, it is labelled question mark. In my area, the deepest well is not so deep.
Whatever native soil still exists seems to be sandy clay, which adapts easily to moisture stress and potential drainage problems. I have experience great results through composting and raised beds. The same can be said for the space I am in now because in the area this square foot exists, terraces of living soil have been built up where there had formerly been air and compacted clay soils, there is a grade away from the foundation that did not exist before... hundreds more sheltering and climate moderating plants and a fence to the east, easy to see over for a view of the river. To the South, the sun streams in, to the west lies our hearth, the kitchen, hub of life. 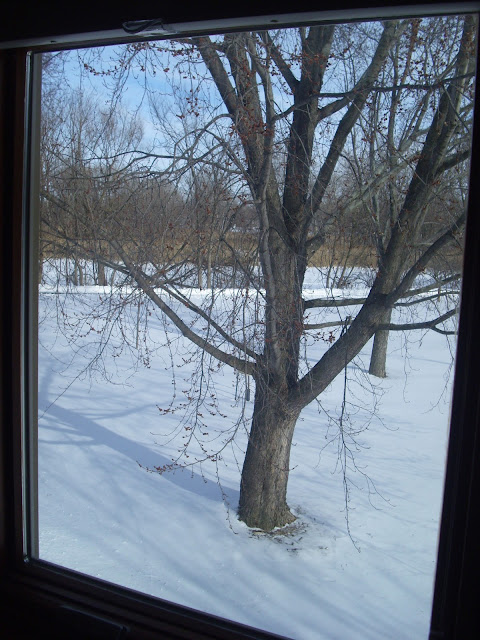 This is the view created by adding just sixteen square feet to our second floor.
Human beings are actually made for relationship. Part of my own experience has been to excavate as much of the waste brick as possible, along with the nasty contaminated water that the previous owner of our house had allowed to "drain" into the clay under the basement floor. Perhaps for the one square foot that I take up, a five gallon bucket of slop had to be removed before we could remediate the basement. After the addition of a drain field of gravel and a proper sump pump, we laid a concrete floor, so seven feet below my feet there is that. The bones of the house are well over one hundred years old and we can document where it stood before being transported to the current location, so in effect, since the thirties, this house has been "salvaged" from rampant development in the part of the wetland that is known now as "downtown".

On the subject of relationship, this is even more amazing, because my first rented place in Green Bay, no longer stands, but was on the same block as where this house stood. I lived right outside the front door of the Main branch of the Library. Where this house was would be as if you moved the main entrance one block south. I lived, for a while, where my house lived, for a while. The bones came from early forestry and have been backed up with double floor joists because some had been damaged in the move. There have been at least two re-finishings of the floor. This one is guaranteed "for life". The area over my head used to be outside, but because of a recent remodel, there is a space to sit and look out over the parkway that runs along our back and side yard. The relationship between the land and the house is better for it, more pleasing to the passer-by eye and to our own. Where previously there had been plaster, joists, no insulation, roof, there is now, plaster, joist, floor, liveable space with windows, for light, Plaster joist/ insulation, roof. relationship through both time and space. The very same ancient sticks that i removed from firs floor walls went to work raising just a few feet of roof  to get over sixteen square feet of living space on the second level!

The last bit is about the roof. I did remove the old composite shingles with metal because the roof had failed and I am uninterested in putting another roof on before I die, plus, if it ever needs replacing, it is 100% recycle-able. The air that wafts overhead is frequently contaminated. On the order of ten to twenty tons of toxic compounds are released into the air within a few miles of my home. On a global relationship, I live near the 45th paralell, meaning that, on average, the sun is hitting the ground at about 45 degrees.

I left off the chair and table which bisect this square foot, and the computer, but the computer is unremarkable in every way but the table and chair are unique. The chairs are from an American factory, lauded by President Obama during his campaign, going bankrupt because people are feeling squeezed to buy cheap furniture from China at Wal-mart rather than paying for premium and proud American crafted products. Our poverty of spirit allows our country to decline. The table, Old Hickory, Martinsville, Indiana. Again, of relationship, I was a "Hoosier" for a couple years of High School/home school, so the table seems to be a good scholarly sort of table/desk.

The exact square foot that I inhabit contains me, or at least my organism and that is a post in-and-of itself.
Posted by Bioneer: Tony C. Saladino at 3:06 PM
Email ThisBlogThis!Share to TwitterShare to FacebookShare to Pinterest