Once made, char needs to be moistened. Moisture is critical to making the char come alive. The best material I have found for that is rainwater, or urine. Char can be extremely hydrophobic, resisting water. Sometimes amazingly so. Super pure char can be difficult to get wet, but when it does absorb water, it can hold six times it's weight in H20. Typically, when adding water to char, it is well to add some of the nutrients you want to be held in the microscopic pores at the same time. Dilute bat guano, urine or fish emulsion will add nitrogen as well, as moisture but I am getting ahead of myself. See the post called: "Mineralize Char" The moisture that char absorbs helps reduce the amount of dust that is generated when dealing with dry char, especially when stirring or crushing it to powder. Char dust is dangerous! Do not breathe it! If you are around char powder dust, wear a respirator! Rock dust was the first carcinogen discovered, char particles are vitrified to emulate porous stone. Moisture is the source of all life and the mixture we are creating as a precursor to biochar is based on water. The microbes we eventually introduce are like us in that their cells are full of water. Remember as well that activated carbon, the exact same thing we just made, to remove chemicals and fish waste from fish tanks, they use it to purify drinking water and to remove odors, but we want to fill all of that filtering capacity with organic nutrients and minerals that will encourage microbes to thrive upon it later on. The best moisture level is one that allows the char to feel like wet sand with no ponding or puddling, no water in the bottom of whatever broad low container you work it in. When wet, the char will have a glassy texture at first and almost squeak as the shards of material pass by one another. The tiny pores and fissures have enough surface area to allow hundreds of billions of bacteria to have space on which to grow. If the tubules get too long, there cannot be adequate access to fresh air and water inside. For the most part, the smaller the particles of char become, the more surface area becomes available for life to thrive upon. Again, this will be covered more in other installments, specifically the post entitled, "Micronize Char". So, when we add a ton of char per acre, it can hold six tons of water, so handling larger quantities presents some specialized challenges as well. For fun, I checked the figures to see how much six tons of water is, since I typically urge folks to add a ton of char per acre, the amount of water it holds makes biochar heavy. Char itself is super light, but when we prepare it for life and inoculate it with microbes, it gets many times heavier. A ton holds six tons of water alone to be exact. I resorted to my Old English rhyme, a pint is a pound the world around, so 12,000 pounds equals as many pints. Two pints to a quart, so 6,000 quarts, divide by four, makes 1,500 gallons. I continued trying to imagine just how much that would be, nearly thirty fifty-five gallon drums (exactly 27.2727etc. of them) to be exact. The way I like to measure large volumes is by Olympic-size swimming pools, especially when measuring liquid. I is about 1/40 of an Olympic sized swimming pool. Held by the char applied to each acre! Add to that the organisms that inhabit the char surfaces hold additional water in their cell walls and that would hold moisture above and beyond the capacity of the char itself, perhaps much more! As we broaden the base of the soil food chain, it kicks everything into high gear, but again, I get ahead of the process. Imagine though, before we get back to moisture proper, a simple doubling of the soil microbiome. See the post entitled "Microbes". Getting back to the moisture part, doubling from a single ton of microbes per acre, to two is more than likely, there might be three or five (perhaps many times more than that,) fold increase in microbial activity when the soil is very rich, extremely fecund, fully carbonized with biochar and nourished long term with healthy mulches and green manure. I have even seen pictures of plants growing in pure biochar, although for most of us, that would be prohibitively expensive. These further tons of microbial creatures are all holding nutrient and moisture as well, moderating and stabilizing changes in the soil climate and ecology. 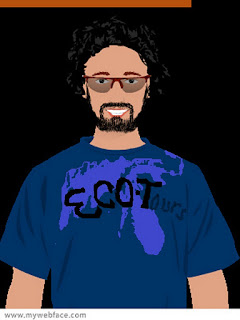 Just remember that you do not want the char to become anaerobic. To cultivate the healthiest microbes, the char should be as wet as a wrung out sponge, much like compost. They also need air and being moist together give the organisms to give the organisms the best chance of survival. Underestimating the needs of these microscopic creatures is a common problem. Making sure they have plenty of resources to get their needs met is the primary focus of the charmaster. I can help get you over some of the most difficult hurdles to making excellent char, but your active participation in the process will help you develop an affinity for what your biochar needs. Again, local conditions will dictate what is best for your biochar. Exponential growth of the community of organisms is normal and natural, we just have to content ourselves with not being able to see the miracles we are able to create in the char.
Posted by Bioneer: Tony C. Saladino at 8:15 AM
Email ThisBlogThis!Share to TwitterShare to FacebookShare to Pinterest
Labels: dust, life, moist, water