This is the part where I utilize non-scientific analogies to try to convey cold hard science. Minerals constitute typically, a full fifty percent of the mass of soil, almost half of the rest of the material we call soil is either air or water. With a tiny sliver of not-yet composted plant material and of course, the soil organisms. We need to understand and respect that when we add compost to soil, 90% of the carbon in this form leaves the soil profile in just four years. It leaves in many ways, because it is essential to the lives of other creatures. It is consumed, broken down, used up, turned into something else, given off in the form of gas, organisms eat it and leave, or the plants it grows are taken away to be consumed, elsewhere. I drew the carbon cycle by diagramming the hexavalent relationship between the points of the carbon molecule, which also echo their relative abundance in these multi-variant forms. Six lines, forming a hexagon make up the skeleton of the diagram: The soil and Earth itself is the bottom bar, the atmosphere is the top one. The two sides represent the plant and animal kingdoms, lower and higher trophic levels. One excellent analogy of the Earth processes is that the soil actually breathes, high pressure conditions are like the soil inhaling and when the stormy lows happen, the earth exhales. Strangely enough, the opposite holds true for the moisture balance. Typically when the stormy lows are present, it drinks moisture, that holds dissolved nitrogen flows in and displaces some of the gasses. Atmospheric nitrogen is taken in to healthy soil, during high pressure, fair weather conditions. 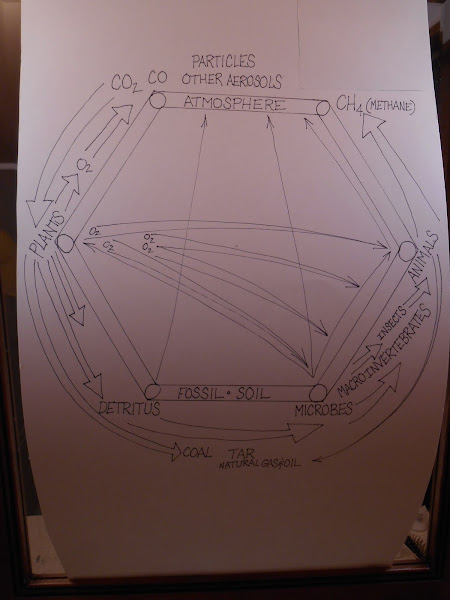 Minerals are also required for proper cell function and minerals represent a hefty percentage of soil. when nature produces soil, bedrock is broken down by processes within to the soil, it helps to keep the soil biome healthy and feeds life the pure mineral upon which it sits. Because we are creating massive amounts of surface area, we also need to add mineral components and nutrients the plants and soil organisms will utilize to keep the soil healthy long term. This involves the big N nitrogen. Typically it can be found in fresh green grass clippings, the atmosphere, as I mentioned, in urine, manures of all types. Basically anything from the yard or garden or farm that smells strong has lots of nitrogen in it. Making the char hold a lot of this nutrient takes time. The pores are so excellent at holding this nitrogen that as they absorb the smelly nutrient, they fill, eventually, when we add too much, beginning to smell. The minerals from local soil are often best, but if there is a desire to temper soil that is either too acidic or too alkaline, the type of rock dust might be different. Granitic rock dust will help increase acidity or reduce alkalinity. Limestone powder would reduce acidity and make soil slightly more alkaline, but changing soil chemistry can be a very long term issue and it is often best in acidic soils to just grow what likes it there and in limey soils to find the crops that do best there. Not everyone can grow blueberries, no matter what the nursery tells you.
What we are attempting to do is make sure all of these forms of life have not only food for quick energy, but that will have staying power, typically in good soils, minerals that are present in the local subsoil is best. If your soil is being limited by being too acidic, you could add limestone for buffering it to a bit more basic. Likewise if your soils are pushing the limits on the basic side, it may be prudent to add granitic rock dusts. Remember, each of these trophic levels depends on all of the other ones flourishing. Mutualism is key to proper functioning of the whole. Sometimes whether an organism is predator or prey only depends on th esize of the competition or if one is sick or dead. The clean up crew is pretty indiscriminate about what they will eat. Also, this is a good time ot add the idea of the biological processing that goes on with carbon. When organic materails are consumed, they typically go through the bodies of three organisms before they have had all their nutrients digested away. The pure carbon that is left, less than 1% of the original mass, becomes humus, the building blocks nature uses to buils structure in soil. If there is a lack of nutrient-laden material for the microbes to consume and thrive upon, their numbers will reduce, so for proper soil health, new detritus must be added to the surface routinely.

This USDA diagram is for educational purposes only. There are many other nutrients that you could add, especially if you have gotten a soil test and understand what needs to be added, but typically, nitrogen is the most important. It is far more rare to have deficiencies of the other two macro-nutrients, phosphorus and potassium, but it happens. When choosing materials to add to char, one of the most important things to understand is the numbers on fertilizer packages all have three numbers on them. Representing N-P-K the numbers represent the number of pounds of each of those nutrients in 100 pounds of the material. high numbers are not necessarily good. Worm castings have very low numbers, but the plants can absorb that form of nitrogen very efficiently, so the functional value is better than more concentrated forms which may not be as easily assimilated by plants. Blood meal and urea are very high, but break down is required for the plants to take full advantage of that form of nitrogen. Typically, our compost has a little bit of everything we grow in it and I do import compost from within carrying distance when I can get good clean organic yard waste. When you begin to see your soil as a large sponge, giving you a tiny percentage of nutrients from the vast trove it holds, like a "nutrition battery" might do, you begin to understand how critical it is to feed that soil as well as harvest from it. In very real ways, the energy we put into the garden comes back to us, like winding up the rubber band on a child's toy airplane makes it fly. I have been told many times by landowners, "Yes, this field is healthy, it has had nothing but hay grown on it for decades." as if he removal of tons of biomass could never deplete the soils. Without inputs, no matter what you grow and harvest, you will eventually deplete available and necessary/essential nutrients, minerals and soil life which is supposed to thrive in it. Understanding the needs of the microbes, we culture the char with, is important. It helps us to know how to prepare the char for the addition of the microbes. Typically, the nitrogen and rock dust are first in, but then I add tobacco and other herbs, especially ones I might use for my own health and healing, hoping to increase the variety of substances available to be broken down. Finished compost holds a wealth of nutrition for soil microbes. Loess, or wind borne soil particles add much as well. Many of the best soils that retain fertility were created when dust settled upon the surface periodically. I try to add at least some to every batch of biochar I make. If you can cut and chop any local plants that grow in un-tilled or "waste" areas nearby, adding that will also help boost the organic content in and around the char. At this point, you could add a variety of mineral rich preparations, kelp or other amendments and any of the biodynamic preparations to really help charge the char for the addition of microbes, but again I find myself jumping ahead.
Posted by Bioneer: Tony C. Saladino at 8:44 AM
Email ThisBlogThis!Share to TwitterShare to FacebookShare to Pinterest
Labels: bedrock, minerals, rock, stone