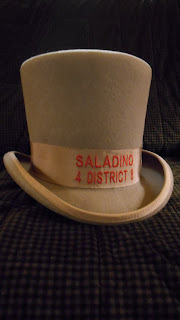 This is the hat I wore while campaigning during the last election cycle. It was meant to hearken back to "Honest Abe" Lincoln. He was supposed to have worn a top hat within which he stored his papers and speeches. I thought that associating myself with a folk hero such as Lincoln would help my campaign for office. Having been born in Springfield, Illinois, I was steeped in the traditional view of Abraham Lincoln being an untiring splitter of rails, a creative student of law and physics, an attentive clerk and man of great and unwavering moral fiber.

As I have grown and learned, he was also one of the greatest killers of "Indians", if not by his own hand, at least by decree, an owner of slaves, raised Baptist, had been documented as a devout skeptic religiously and there is ample evidence that he was a deeply troubled soul. He even resorted to adult fairy tales about religion after 1865, perhaps to capitalize on a supposed general religious leaning at the time. His torment was not wholly because of the mental health issues of his wife, but also because of the uncertainties of war and the sending of a generation of young men to their deaths in far-off places that meant nothing to them, from diseases that were little understood at the time. The interference that the years provided me in my quest to find out the truth about Lincoln came from many, often sub-conscious impediments to understanding him fully.

First, and perhaps foremost of these is the passage of time. It is hard to get the straight story when no one alive knew him personally. There were ample opportunities to interview his contemporaries when he was alive, but they passed without exhaustive study. Perhaps the cold-blooded killing of him by a secessionist sympathizer was to blame, perhaps the folklorists wanted no part or portion of truth to contaminate the image of the Civil War hero they wanted to cast him in. It is not for me to judge their motivations. That would only bring my own version of interference to the message that he holds for us in our collective psyche. Another source of interference, intended or not, came from the fact that he was the first President elected under the auspices of the "new" Republican Party. They had their own idols to adorn.

A friend, who has his heart in the right place is running for public office here in Wisconsin. His campaign has spread the message of truth and frustration that most of us feel regarding the selling of our state to the highest bidder. The undermining of environmental laws that "we the people" (to quote Lincoln himself) helped to write, has been the lasting legacy of our current Governor. Scott Walker's well-heeled, out-of-state funding sources have no problem sending him millions of dollars more to subvert the will of the people. As long as the benefits continue to accrue to them and we are left paying all the costs. In the case of Foxconn, we have actually let the foxes have input into our design of our collective chicken coops. The Legislative Fiscal Bureau, the non-partisan accounting arm of Wisconsin government, puts the true cost to taxpayers of the Foxconn boondoggle at $10.1 billion, even though sock-puppet for the Koch brothers keeps saying it is only three billion. I am loathe to say anything negative about my friend's campaign, because he if fighting the good fight, but even so, he had an advertisement recently that associated him with the mythic, David, who vanquished the Giant Goliath with a slingshot. I am sure that the image of that story is alive within each and every one of us, much like the "idea" of Lincoln resides in our collective consciousness, if only that his image graces both pennies and dollars. My friend must not have realized that a much more deeply felt association exists, as the slingshot was the weapon of choice for those white racists who lined up at the boat landings here in Wisconsin when native people came to exercise their treaty rights. One can plainly see and understand that his campaign faces an almost insurmountable challenge within native communities, interference with his message from an unexpected and perhaps unexplored angle, may lose him support. This would be tantamount to campaigning in a mostly black community in a clansman's hood.

Interference can come from so many places that it is hard to say exactly what it is and how it comes about. On a molecular level, substances can interfere with the RNA replication of DNA which in turn leads to genetic errors. This contaminant can be seen as interfering with natural processes. Similarly, there has been interference with the hydrologic cycle in the form of ditching and draining vast wetland complexes, pumping of deep as well as shallow aquifers, bottling water and other beverages, then shipping them to entirely different watersheds and the damming and use of water in areas it was never intended to be under natural processes. Prior to humans, beavers did disrupt the flow of the hydrologic cycle, but their interference was just to get the water to hang around a little bit longer and flood areas to relatively shallow depths. We must come to fully understand the depth and breadth of our interference on natural systems if we are to make changes that lead to a re-bound within natural systems/communities. That might be protecting our genertics, our quality of life, and/or the availability of essential resources (ie:"gifts" from Creator) like clean air, clean water and uncontaminated, healthy soils that contribute to our continued evolution. How and why we interfere with natural cycles may not really be as important as knowing how to avoid interference that damages the environment for yourself and others.

Essentially, my point in linking these factors to describe interference is that each example I have listed is anti-evolutionary. They either codify lies, justify falsehood, or perpetrate messages that are not true. Our purposes as ECO-Tourists and good world citizens is to know and understand the world around us in the most complete and intimate way possible, to find ways to resonate and harmonize with natural forces, natural tendencies, not disrupt them. Some may say that a genetic aberration here or there in the human genome is important or desirable, that it forces mutation, but I would rather not risk genetic damage caused by toxic chemicals in our air, food and water in the hopes of creating a positive effect. In my own life I have experienced interference by bullies, fools and those who could not understand that their justifications only proved the abject lack of knowledge between themselves and the natural world.

One good deed multiplied by over 7.6 billion people can have a resounding effect. Allowing the same number to justify bad behavior based on false assumptions has one as well, but in the opposite direction. Let us be ever mindful of the things that interfere with truth, justice and evolutionary change, calling them out for what they truly are, lies. Getting on with what we all know needs to be done must commence. We are virtually all on the same page with this.

I ask one question perhaps a dozen times each day, "Will this help? Or hurt?" Things that hurt, or impede flow, the essential quality of being fully alive, fully functioning and fully supported in our inalienable rights, and natural systems/conditions must be let go. We need to collectively focus on enhancing and sustaining flow, both individually and collectively. Getting in touch/tune with nature is paramount in helping us to better understand ways to enhance, rather than interfere with or impede the evolutionary process.

It sometimes feels like the oligarchs are deaf, or cannot hear our collective cries. It is not that, they just do not care. They feel perfectly justified in waging a class war against the rest of us. After all, we are the rabble and they are the kings of our day. They have the best ideas, Calvinism and Thomas Hobbes have supported the "proof" that wealth guarantees better judgement and that they know better than the rest of us, what we can do, what we need done, and what we want and deserve. Instead of having to honor and respect natural systems, they have devised "new and better" systems that marshal all of our efforts to make their status as lavish as possible.

Posted by Bioneer: Tony C. Saladino at 1:36 PM
Email ThisBlogThis!Share to TwitterShare to FacebookShare to Pinterest