I am coming to understand that seeing the future is not as much about having some sort of divine intervention or transformative experience involving the divine, but it is arrived at by paying acute and critical attention to details, motivations behind some of the slightest actions and grasping minute details about the now and trends that have been established over time. The more deep the dive we take into experiencing fully both the past and how it affected our moment in time, the more likely we are to "see into the future". Not one of us can say with certainty what the next big thing will be. A short list of trends will prove that. For instance who could have said before hand that chipotle, which has existed for centuries, perhaps millennea, would become so ubiquitous that you could not swing a cat without hitting something with smoked pepper spice in it? Pet rocks, clackers, fidget spinners, blogs and books "on tape" seemed extremely odd, quirky and arcane until they became ubiquitous. In hindsight we say, that it was inevitable, but to presage those trends required not just out of the box thinking, but an element of understanding what humans want and need, their underlying perception of lack that drives them to the marketplace, or what makes them feel guilty. Even though if you asked the person they might not know or admit to it, but we all have a sense of guilt that we are not being "productive enough" when we drive to and from work every day, or do the tasks that have become rote with basic,boring repetition. I mean, there is only so good a job you can do pairing socks or folding shirts for heaven's sake and driving, well...One of my mentors who taught me little else used to say, driving is like a contest that everyone can win if we all get safely to our destination with no damage to any of the vehicles. The books on tape allow us to learn, have fun with and be read to while doing some jobs that just need to be done, but that we could nearly do without a thought. If the stressors get too high to pay attention or you have to concentrate on changing loads of laundry for instance or if you like the turn of phrase and just want to hear it again, you can always rewind the tape a bit or have an instant "do over". All of these trends have been based on conscious as well as unconscious wants, needs and desires. The main taproot of prophesy, it is my contention, goes deep into the heart of humankind and pulls up what is salient when others might scoff or blatantly deny those needs, wants and desires. Honestly, I still don't understand the fascination with chipotle.
Growth and adaptation are the rule, not the exception. We can look at trend lines until we are blue in the face, but in virtually all things sociologic (dealing with people and their behavior) all trends seem to have a break point where things steadily change and then suddenly, the sky is the limit or the next day the trend falls flat. Anyone who has participated in a trend knows what I'm talking about. Remeber when the cool kids collected Pogs or when beanie babies were the hot new item? What about the Mrs. Beasley dolls or Cabbage Patch Kids? If you are of a certain age, there was a time when yo-yos were hot, or stuffed Smurfs and E.T.s could not be kept on the shelves of stores. I know it sounds odd, but trends almost presage their own elimination simply because they are trends. Trends start with a few odd balls. in the business, they are called early adopters. Then, the cool kids think it makes them special to get on board or it fills a need in them. Soon everyone wants to, using the yo-yo example "Walk the Dog", successfully pull off "Around the World" or perform "Cat's Cradle". The only reason they still sell yo-yos is because some people are still fascinated by the inertia of the spinning top turned horizontally. If a trend helps us to excel or refine hidden talents, develop or show off, have more time to do the things we love or to simply feel seen or heard, in the case of clackers, standing out from the crowd, the trend line goes up. If these factors get removed, that is when the trend line crashes. That is why the most annoying trends have to constantly reach extreme levels. That is why some people juggle while standing on their head and simultaneously balancing on three chairs stacked on a ball. Or two people do all these things on opposite sides of a teeter-otter. To keep things interesting at this point, one person may juggle knives while the other juggles flaming batons. It is also why luxury cars, monster trucks and blowing coal exist. There will always be those who want to be the oddballs and will pay any price to remain the most extreme. 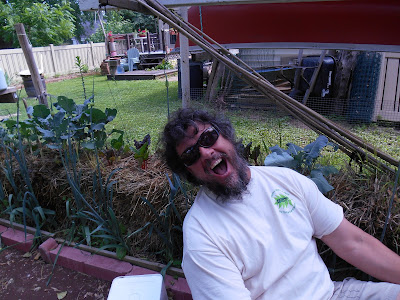 This is a photo of me in my garden. When I bought this property, every inch of it was hard-packed, expansive clay. When it was dry, cracks up to an inch across would open up across the whole surface, deep enough that until there was a full inch of rain, they would not fill up. when it was dry, there was so little life in it that you could throw a sharpened spade down, in an attempt to pierce the surface anywhere in the yard and it would bounce off and ring like a bell. My passion was for organic gardening and this image is of me when I had acheived three crops on the same square foot of soil for the first time. Now, I'm up to five crops on one square foot in a single growing season and don't get that level of joy from it because it is not as novel as three crops was back then. This is another reason trends occasionally die out. If you need to constantly out do yourself but the technology or technique has finite limits, once you are up against them, you may lose interest. Going back to yo-yo tricks, I have seen it claimed tha tthere are fifty of them, but if the cool kids only did ten, you may lose interest when you master those ten. you may only get good at three and that could make you lose interest. You could even tangle the string or tie it to the shaft with the wrong knot and you might give up the whole undertaking on day one, but at least you bought the hot "new" trendy item. But, for now, let's go back to the garden. What allows some people to sustain what would otherwise become just a trendy diversion or after the activity or item loses that lustre that can only come from "newness"? I contend that it has to do with how well it serves the future and this is where we can sidle up to prophesy. When we can see through the now into a future time and understand the wants and needs of those people who inhabit it. We have always known that some people will always say, "I have a black, (or brown) thumb." or "I can't keep a cactus alive." So, the chia pet was created. That one, as strange as it may sound was sort of a no-brainer. What is odd, to my way of thinking is that they have not yet offered chia self portraits. I guess not enough people want to see themselves with green afros. How much people invest in trends is often directly related to what they get back. For some, having a crowd pay to see them perform does the trick. Chances are, if you ever see the two people balanced and juggling on a teeter-totter, you will have paid to see them perform or you are also part of the troupe who are backstage watching them practice. My gardening gets practiced in relative isolation, but as I offered neighbors some of my extra produce, it brought a handful around to start asking, "Hey, how did you do that?" When I strted, I was the weird guy at the end of the block collecting everyone's leaves that they put out to the curb in the fall. those who asked, or paid attention realized that the yards that were full of trash or outright garbage had their leaves passed over and when the leaves turned to lawn clippings the next spring, the people who used chaemicals also had their grass clippings left behind. If I didn't see parts of dandelion leaves or flowers in their yard waste, I didn't want or use it.
Building up the organic matter in my soil took years but I never got bored with it. I pushed the limits of what I had heard is a "good amount" of soil organic matter. I began to study just what I was doing in a scientific sense and tried to grapple with how and why I inherited such awful soil. It was because it had been treated like dirt for so long, abused and taken advantage of, there really wasn't any soil left. Then, I learned that on average, agricultural soils in the U.S. have as little as 1% SOM (Soil Organic Matter)I have seen soil tests as low as 0.6% and heard of them as low as 0.4%. I stopped checking when I got over 10% but I know that you can and I did go higher. The USDA (United States Department of Agriculture)and the NRDC (National Resources Defense Council) have known for decades that increasing SOM 1% will allow soil to hold 25,000 gallons of water per acre, making that water available to plants. It does not take a sage or soothsayer to understand that if humans are to survive on this planet as a species, we will need to increase the moisture holding capacity of soil and this trend has already begun. The results of what we have done since the advent of fossil energy use in agriculture has created a devastating trend and the line, when followed into the future will give us more drought and more floods, more desertification and less healthy crops. The trend we are on the threshold of is to flip the script and build soil, with organic carbon. Not doing so will result in the elimination of our species. The stakes are high but the propensity of people to jump on the hottest new trends should not be overlooked, it may be the only thing that can save our species.
Posted by Bioneer: Tony C. Saladino at 6:26 AM
Email ThisBlogThis!Share to TwitterShare to FacebookShare to Pinterest