Festival of the Dead

Many cultures honor their dead upon the moon of last harvest, the reaper is ever-present, but the influence of death subsumes the whole environment at this time (in the Northern Hemisphere) please pardon my out of step calendar to anyone living below the equator, likewise for readers in the tropics. Near the halfway point between the tropics and the arctic, my experience of days is noticeably shorter now than just a few weeks ago, hours have been lost in both the early hours and the late afternoons in ways that affect the rest of the day profoundly.

In preparing for the coming winter, there have been many more tasks to do in ever-dwindling amounts of time. This evolutionary as well as ecological experiences lead humans to consider our own mortality and that of our progenitors that date back across ages. The current boom in genealogy has reintroduced the family tree to many families that had all but forgotten their ancestry, at least for my family, anything back before great grandmothers and great grand fathers, had become a bit sketchy. Before coming to America. Those parts of our family were nearly reduced to a flag that currently flies over that country. Even the lifestyle and livelihood of great-grandparents was glossed over for the young. I hope that more of us have deeper understanding of our ancestry than that in the future, I think that part of the desperation and isolation that many feel are based on the fact that their continuity of the ages is not part of the awareness of many people. When we begin to honor the eternal calendar, we can do the same processes and participate in the same activities as the vast majority of the Earth's population have done since the beginning of time.

If we are lucky enough to be granted life, how we use that life can honor their efforts by adopting some of the ancient tools and techniques, the ones that worked for them that are still important today as well as discovering some of the ingenious processes that allowed them to give us life, we can work to change many of the things that have not worked so well in the very recent past. Being out of touch with the ancestors, or any of our loved ones that have passed the veil can be scary, but when we learn to take a our place in the chain of ancestry, we can rediscover a sublime power that is absent in many of our lives. The relations in my own family tree go back to India, Western Europe and Scandinavia (as far as I know). Each of these cultural groups have native populations that were subdued by forces unleashed upon them from afar. Their very existence threatened by raiders, missionaries, kings and marauders. Ironically, they all eventually landed in The USA, where the native people experienced the same things at their hands.

When we learn to respect the sacrifices and commitments that were made on out behalf, it can help teach us valuable lessons. Not only can we see through the current haze of what seem to be a million pressing issues into the very roots of our species survival. Gatherings at this time can serve to reconnect us with who we really are by investigating a bit about where we come from and honor the fact that each of us are presented an open page upon which to write our own stories. Many of the pagans I know observe this as the New Year celebration, entering into new commitments for the good of our community, pledging to re-open our hearts to the needs and desires of others and the eternal urge to leave something for those who we will eventually leave behind. With luck, we can also let things pass that refuse to serve, kill off that part of ourselves that is not contributing to our own good and plant seeds of hope under the dark earth. 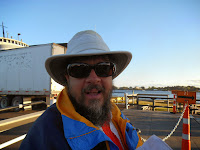 Posted by Bioneer: Tony C. Saladino at 3:02 PM
Email ThisBlogThis!Share to TwitterShare to FacebookShare to Pinterest