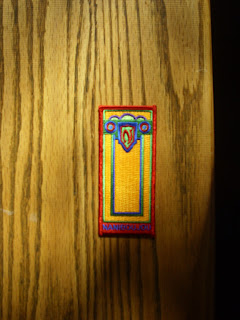 Naniboujou, the spirit who lives in relation to the forest, the sky, glade, glen and vast prairie, the realm of all of our animal brothers and sisters. I have read that Cree and Anishinabe storytellers regaled their audiences with Why Deer Fly a Flag as They Run, How Woodpecker Got Splotched Red, Why Beaver's Tail is flat, as well as, Why Geese Fly in "V"s and this trickster figures into all of them. Although, he is a sometimes vengeful and capricious trickster, he is bearer of great many gifts for humans, even though it can frequently be by mistake or accident. He taught humans about medicine and agriculture, but frequently through hard won lessons. To think of him as benevolent, is dangerous folly however, honoring and respecting his many disguises is essential.

This fellow is first of four brothers. Chipiapoos, lost to the Great Water, considered to be lord of the dead and forever returning to the depths of Lake Michigan. Wabasbo and Chakekenapok, whose very birth seems to have killed his mother. Naniboujou eventually takes revenge for his mothers death out upon his youngest brother, ripping him asunder, leaving behind flint for humans and his entrails are forever among us as vines.

There can be nothing wasted or overlooked within the watershed of the Great Lakes. Among freshwater systems, the Great Lakes are unique in that most of the water that comes into them is from rain or snow, not tributaries. Except for oceans, most lakes have large drainage basins and relatively small surface area. The Great Lakes are approximately 25% of the total drainage basin that feeds them. In other words, if you sprinkled a single gallon (3.78 liters) of water evenly across the watershed, one quart (.95 liters) would go directly into one of the five Great Lakes.

Just as Naniboujou has had to have relations with Father Sky, Grandmother Moon, the sacred waters and Mother Earth, so too must we. The trickster is as alive today as he has ever been and lives within and among us. Honoring and respecting the presence of this great teacher and healer can be the beginning of an old myth that can serve us well today. Keeping alive the memory of the great circle of life is our responsibility. Our stories will reveal eternal truths but only if we continue to utter them.
Posted by Bioneer: Tony C. Saladino at 11:49 AM
Email ThisBlogThis!Share to TwitterShare to FacebookShare to Pinterest
Labels: art, Lake superior, Resort