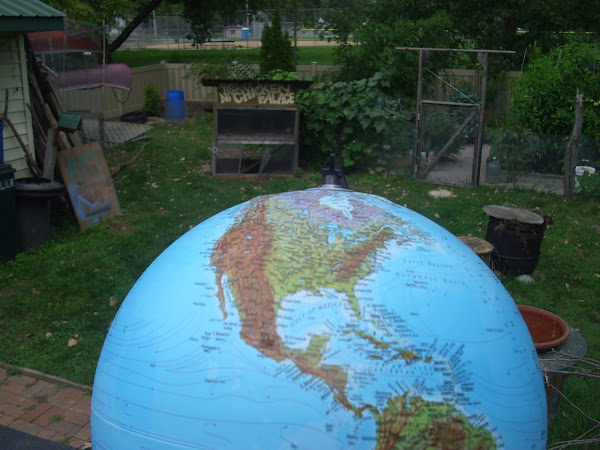 The frost has come out of the ground...many believe that the earth is waking up, but the bio-dynamic folks see things a bit differently. For many of the deep ecologists and earth worshipers, we recognize that the Earth is most awake and alive in the depths of winter. The unmistakeable crystal clarity of a below zero (sub -16C) day is often one of the best times to see the Earth aware, awake and alive. Seeing it in this clarity, just for itself, can help us come to terms with our relationship with it. What people recognize this time of year is all the creatures that inhabit the planet having their way with it. The creatures acting upon it and making their living in or on it are masking the being that is the planet. A farm, village or town, even a single residence or park lie upon the surface of the planet, each having their own ecology, their own relationship with place, but for the Earth itself to express what it truly is, the best time to see and understand it is when the life upon it has been reduced to stasis or has been inactivated by stillness. The long nights and short days of winter are often the best time to get in touch with the land, the energies of place and the geographic identity of the land itself. Now that the frost has come out of the ground, we are looking at many things, but none of them are the foundation of life itself.

We saw the first robin eating the first worm this first week of April. As soon as they are able, the creatures begin to overwhelm the land with such a profusion of life that we often forget that the Earth itself is separate and distinct from the life upon and within it. When we act upon the planet, we may work from the neck down, but having the heart of the land in our awareness is not enough, understanding how to feed and dispose of the fundamental "waste" products of the land is not enough to harmonize with the planet either. We need to understand and develop a relationship with the head, the hopes and dreams of the land as well as the intellectual capacity and understanding the planet has with what goes on around and within it. When we begin to develop a relationship with the foundation of life, we can gain a better understanding of the whole. The natural phenomena that take place in and around us are mere reflections of the Earth but especially now, as the biological activity increases, it is easy to mistake the profusion of life that depends on the planet as the important part.

This week I have been coming to a much deeper understanding of this fact and this is what I have found. We typically go though life looking at the tops of great pyramids. We use the elements which we are aware of to navigate and create meaning in our lives. To begin to grasp this idea, say one pyramid (since it is topical at this particular moment) is religion. We conceptualize or see a pope, or the Buddha, perhaps a priest or pastor. We look to education and see a teacher or principal, perhaps a school board or state superintendent of public instruction. We go to a store and see the products on the shelves. Each of these "entities" or objects is dependent on a vast support system, nearly beyond our comprehension. Tens of thousands, millions, perhaps billions of discreet relationships were required to create each and every one of these towering pyramids, but we have been trained to think that the apex is the important part.

We have been led to this belief through our own hierarchy of needs, our desire to make sense of the world around us and the predominant focus on soaring heights rather than the basis of our existence. As long as we are willing to forget the foundations and revel in the uppermost part of the structures around us, we will miss the most important part of life itself and remain unable to come to terms with relationship. Like a pyramid, the lives of the slaves who created it are every bit as important as the Pharaohs whose tombs they were built to house. The ruling class has a good laugh at the expense of the lower classes, but without them, the entire system would collapse. I believe that if we went far enough back, the construction workers who built the pyramids would have joked that the first few slaves who were crushed under the extreme weight of the building blocks would work as lubricant and make the stones move more easily, but that if too many were crushed under the blocks it would make them more difficult to move. This dehumanization sounds crass, but we are far too willing to buy into the seductive belief that what we do is justifiable and that the goals which we have, no matter how high aloft, must rest on the exploitation of resources that we rely on for us to build to ever-higher levels. Exploitation rather than relationship are the watchwords of the failed systems, be they religious, economic, political or spiritual.

The value of and sheer number of people who have been willing to sacrifice themselves to the creation of the "pyramids" that we recognize today must be taken into account if we are to see the whole more clearly. Producing grain and meat in the Desert Southwest, or upon the Great Plains has depleted the largest aquifer in North America. The Colorado River has been reduced to a salty waste discharge in Mexico that never reaches the sea. The massive debt that has led to the formation of our food system has enslaved millions of farm workers. The "belief" in god has translated into exploitation and oppression of millions of souls for the enrichment of a precious few. Even the bald eagle cannot thrive without a billion minute creatures filling their specific niche in the environment. When we look deeply into any of the systems that lead to our current state of affairs, we will be struck with the power of relationship and the Earth itself only creates a stage upon which these relationships can be played out. Change never starts at the top. We are each responsible for making new foundations if we are to grow a new system that values relationship and humanity, true peace and security depend on relationship, not the soaring peaks of power and control.
Posted by Bioneer: Tony C. Saladino at 7:26 AM
Email ThisBlogThis!Share to TwitterShare to FacebookShare to Pinterest
Labels: aquifers, Colorado River, Earth, ecology, education, exploitation, groceries, humanity, Pope, power and control, shamanism, slavery