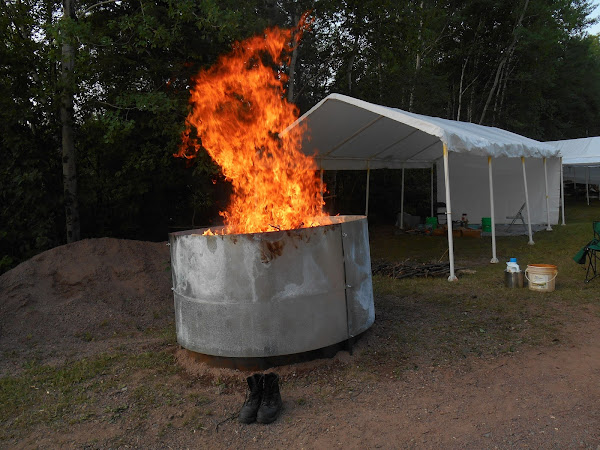 Char created, approx. 130 gallons everyone who received char also received instruction on turning it into a forever soil amendment that will enhance the habitat available for the soil microbiome for tens of thousands of years! 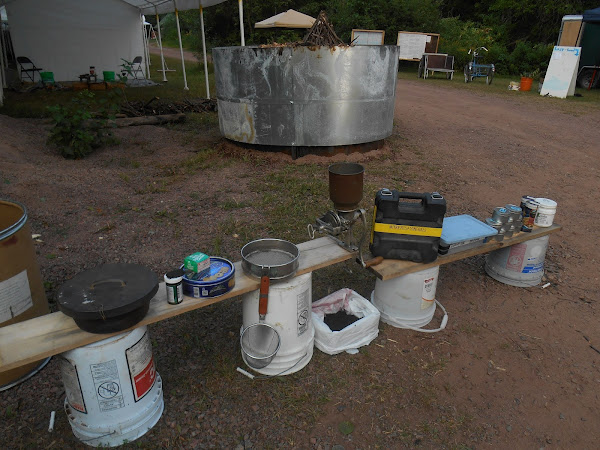 This was my process laid out to mimic the timeline. First, on the left, a small retort made from a dog dish and a lid found at St. Vincent DPaul thrift store as well as a cookie tin and self tapping screws. When making char using a retort like this, you need to put your dry woody material inside the tin, secure the lid with three self-tapping screws, then poking a few holes in the top to let the flammable gasses escape. The evidence that you char has finished, is when th egasses stop coming out, to cool, just flip the container upside down, holes down on a relatively flat surface that is fire proof. Between the two retorts for making char is a one ounce chunk of completely pyrolyzed char, propped up on an herbal supplememnt container. For scale, the container is just over four inches (10.16 cm)tall and two inches wide (5.08 cm) on the bottom part The white lid is 2 1/8 inches (5.4 cm)across.The one ounce chunk easily fits inside. Just a handful of char has fourteen acres of surface area, so adding the proper amount of nutrients, minerals and essential life takes time. The next two items can be interchanged, but the best end of the wood to mount the crusher was after the screening step. In fact, they must be interchanged, until it is crushed, it can't really be screened. I heard of an event that took place this weekend, where three and a half tons of char were "danced" down into small particles! That will be some seriously energized material! The crusher in small scale can be a hand crank coffee mill. Larger scale crushers can be made from concrete mixers with a few boulders in them, hammer mills and grain mills are also serviceable. A functional large scale screen can also be made by inserting 1/8 inch (2mm)screen inside a slotted 55 gallon drum, then rolling it on a tarp or over a wheelbarrow. Again, for maximum efficiency and carbon free operation, human powered units count for more carbon storage points than electric ones. Beyond that, of course are the nutrients and minerals. I found an eloquent way of saying succinctly what folks need to know about nutrients and minerals. Add nutrients and minerals that are abundant under your management scheme and cultural practices. That allows each farm to understand the words the way their scale and particular land offers. If you have livestock and manure is available, use it! If you have slaughter operations, or catch a lot of fish, use that waste! As many sources as you can get, added a little at a time. When you can't have the scent of the nutrients disappear after stirring the char for a few days, stop adding, you are approaching stauration! Between the black box and the blue box, is where the longest part of the process takes place, adding microbes and allowing time for their maturation. Think of it like having a pet for about six to ten weeks. During this phase, you need to check on and stir your 3-D black petri dish two to three times every day. At 14 acres (5.6656 ha.)per handful,microbes need many, many generations to populate it.Since most of them are not very mobile, the stirring helps tranfer them surface to surface, so stir them with love and compassion, you don't want to be aggressive and violent about the stirring, but just take some effort to thoroughly mix the material, it really helps get the transfer to take place. If youhave done well, providing a wide varit=ety of nutrients and minerals will enhance the availability of habitable space when the ransfer is complete. Several "tricks" exist for getting good microbial communities. It does not hurt to have them be local either, the stronger the members and local winners of the local microbiome, the stronger your biochar will be. Find the best microbes under compost heaps, elder trees wherever your best soils are, or make a compost tea. Try a little of all three! The blue topped container is the biological "test" that I use to determine whether char is "done" or not. The sides, which I temporarily segregate with a small piece of cardbord, are labelled "WORMY SOIL" and "BIOCHAR" I fill the two sides, then remove the cardboard, loosely cover it overnight in the garage or basement. If the worms can be found on the biochar side the next day, it is ready to be released into the environment. I have had them reject the char and after stirring and keeping th emoisture level perfect, abotu a swet as a wrung out sponge, they deemed it finished! At the very end were a few containers of crushed, charred material that I had for sale, enough to do three to five gallons and a larger one that would be enough for a four by four foot (1.2m X 1.2m) bed. After the burn, the tools were packed up and the buckets were filled with finished char. We also had a few larger volume containers, a couple thirty gallon ones and a twenty gallon one, plus a half dozen containers large enough to hold two grocery bags full each. It was a veritable char fiesta! 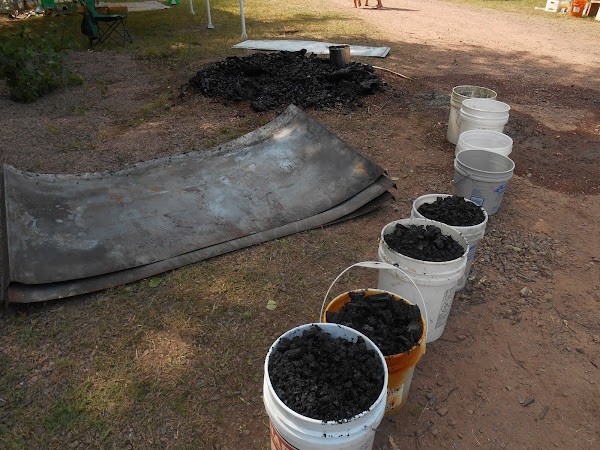