I met some people the other day who were dead set against having wind turbines anywhere. Especially anywhere they would have to see them. They claimed that four families had moved away in response to wind turbines going up in their area. What they claimed that they do was a collection of things that I wanted to understand. There must be some sort of cohesive understanding of what these ideas are based on, right? How they "learned" these things only becomes important when you begin to understand how much money, time and effort have been put into studying and teaching these false claims to others. One of their claims is that turbines are getting louder. I am hearing/feeling the throbbing of our local coal fired electric generating station four and a half miles away. But to be fair, it produces more power than 200 wind spinners. Using machines to do work is not quiet by any means. These people also said that all the turbines interconnected so that when one went down, or stopped running all of them stop producing power. The most interesting complaint was that if enough turbines are put up, it will slow the Earth's rotation, lengthening days, reducing gravitational forces and creating climate change. These extremely strong-headed folks also made an outrageous claim that each turbine gets what they claimed to be an $11,000 subsidy each year just for being there. So I went out, trying to find out if any of it was true.

I hate taking the word of others only because I have been burned by doing so in the past. I try to be impeccable with my word, but to do so means not accepting the claims of others until the facts behind them are understood. Sometimes, even the motivations of those speaking need to be taken into consideration before one can understand their claims completely. It seems that virtually none of what these folks had to say was based on fact, however, as fervent as they were, it is hard to envision a process by which they could be educated out of their delusion.

What I found was, that there is a subsidy that was set in 1992 at one point five cents per kilowatt produced. (that number has been annually adjusted for inflation.) To get a thousand dollars each month, you would be producing 100,000 Kw. Aka 100 megawatts (mw). I went on to study even more critically, trying to find out where he got that number. For perspective, the Pulliam power station, which sits at the mouth of the Fox River, the main tributary feeding into Green Bay produces 350-375 mw, but it does so continuously, nearly without stop. It seems that if the wind towers are producing 1.6 megawatts, each, which would lead to the subsidy being in that 10-11,000 dollar range, It would take over 200 wind turbines to equal the output of our nearby coal-fired power generating station and they would have to spin 24/7/365. Wind is intermittent and I frequently see whole groups of turbines sitting idle. When I began to understand the meaning of this, virtually all of the other claims became questionable at best. 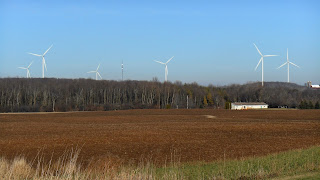 First, noise is the result of inefficiency, the wind turbines that I have sat under and walked around are quiet, very quiet. In fact, that is part of why they seem so beautifully elegant to me. The quieter they are, the more efficient they are and the owners know this and have a vested interest in running them as efficiently as possible, especially if their subsidy is based on their production of energy. The fact is that turbines have actually gotten quieter, to harness as much energy from the wind as possible.

Even in the most blustery conditions, it seems that on the large wind farms there are one or two turbines that are not spinning.  There would be no point in running all of the others if a single stopped turbine was taking all the energy produced by the others away. Considering the costs of putting even a single tower up, running them this way would not be worth the subsidy. I'm not an expert, but these machines are smart now, if they are not running efficiently, the things stop themselves, which occasionally requires power, but broken down ones mean jobs, for real people, like me, not a guy blasting away at a mountain or setting explosives deep in a mine, technicians at turbines are high tech versions of me and probably get far better wages than either me or coal miners. Good jobs. I have lived in the Coal Region of PA and can attest to the death, destruction, desperation, misogyny and mayhem that boom-bust economies foster. Turbine technicians, on the other hand, could sleep in their own beds at night if we had wind farms abundantly in windy areas. The economies of scale are making wind far cheaper to install than coal or even natural gas generating facilities. I'm not a technocrat, but conservative thinkers should all agree that fossil energy will only exacerbate climate change. I have a ticker on one of the blogs I follow that shows a graph of how many Hiroshima bombs of energy have been released to the atmosphere since 1970. Over four billion four hundred million and counting. http://climatechangepsychology.blogspot.com/  Reviewing now, so forgive me, each of the 400 million is a thousand thousands. The billions are thousands of millions...Take your time, think it through. Four thousands of millions. We all saw the pictures of the sorts of clouds and energy released when that amount of energy happens all at once, but when it happens slowly over time from many areas of the globe, the way we release it, from millions of discreet, often mobile sources spreads the release over millions of discreet environments. Wherever humans congregate, releasing their BTUs near others, giant invisible high pressure ridges build up over the cities, roads and towns, which in turn act like invisible mountain ranges. Expanding air is the result of burning. I have seen these effects since the early eighties and continue to see them get more pronounced and more pronounced over the last thirty years. I have even seen repeated events where this high pressure ridge actually gets sandwiched under colder, dense air for days on end, stagnating and picking up the pollution released over several days into a giant bolus of nasty air, before "fresh" air blows the nauseating bolus somewhere else. This is the result of fossil energy and renewable energy gets extra points with me on this fact alone.

The idea of slowing earth's rotation is actually pretty funny on the face of it, but I had to look into the energy available, the relative amounts of energy in natural phenomena and the affect that wind has on keeping the Earth spinning and the more I understood, the more ludicrous the claim becomes. A single hurricane  contains more energy than humans use in a year. But even if we lined the entire coast with wind turbines, and somehow all the turbines took a direct hit from the storm, we would not reap even 1% of the energy that one of these storms contain. I also discovered that winds don't effect the spin of the Earth much at all. The winds are more likely affected by the rotation of the Earth more.

My most recent theory is that the four families that moved away were just able to use the wind farms and turbines as a timely excuse. Anyone keeping up on the lives of farm families knows that they are under extreme stress already, mostly stemming from their reliance on fossil energy and one more thing to worry about is often just enough to push them over the edge. Restless sleep, exhaustion and the host of supposed medical problems that farmers are attributing to the turbines is much more likely to be from chemical exposure, contaminated wells and/or financial stress than the nearby wind turbines. In fact, many people prefer to sleep with white noise in the room.

Ironically, we have had more than four families leave our neighborhood in the past year and the closest wind turbine is more than a dozen miles away. Crushing debt burdens, homes and farms that are financially under water and having to pay more for flood insurance to cover the increasing claims, primarily from uberwealthy home owners on the coasts, are more to blame in my neighborhood for the hollowing out of our community than wind spinners. Heck, even the crippled job market and the policies of our horrible slate of currently "serving" Teathuglican operatives in Wisconsin politics has more to do with people moving away than wind turbines. We need to look hard at why so much is going into the process of misinforming well meaning people. Oddly enough, the ultrawealthy are spending more to try to stop wind towers from going up than the industry spends on building them.

We have a problem Houston...
Posted by Bioneer: Tony C. Saladino at 7:49 PM
Email ThisBlogThis!Share to TwitterShare to FacebookShare to Pinterest