Three powerful words... they carry both the potential to waste time and confuse, but also, oddly enough, they are only the beginning of a myriad of stories, a background upon which we lay out and test our new awareness, insight and experience.

This post is not about the trivial things that were more of a mal-formed or broken mimetic device than anything. Whenever I eat fresh peas, before the first bite, I "hear" the poem:
I eat my peas with honey,
I've done it all my life,
it makes the peas taste funny,
but it keeps them on my knife.
This brief snippet runs through my head, every time. Growing out of that is something I never wasted time considering before, perhaps now that tag along electrical storm in my head will lose its power over my brain cells. There are a million stories that could flow from that beginning, specific stories arising from the action of realizing that a different kind of normal has become necessary. From things like thinking, as a child, that the DJs on the radio sang all the songs, to the first time you heard someone say "This is our song." and thought that they actually wrote or performed it. We all had juvenile imaginings that eventually needed to be revised, but this is more about adult imaginings and how they too can restrict our ability to see the world around us clearly, or act upon it effectively.

Now we are entering an age that will require very different solutions to recently made problems.

We never before needed an herbal therapy for the drug or pollution addled brain. There were never brains forced to function in situations like that, since the advent of humankind. We humans had experienced isolated occurrences of things like lead poisoning, malnutrition, abuse, neglect or ergot, but we now have generations of people who take pharmaceutical drugs and carry out their lives in a haze, or fog of toxic compounds. My own conceptual framework, my field of experience, led me to understand, become adept and think in terms of being a human voice for Trees, for the Great Lakes, for the creatures who inhabit this finite planet. Recently, this has not been enough and I have learned a new voice, a new language, that I have facility with. Being a healer, I speak for the plants and herbs who co-inhabit this planet with us. Like any growing organism, periodic reconfiguration and "turning over new leaves" are to be expected, this growing realization about my own new phase of existence brings an even more broad and more diverse set of truths that I can draw on for support. Honoring diversity has led me to begin to fathom the extent to which we are one, with one another and the planet. Imagine a world in which three vegetables made up the bulk of what we humans had to consume. It is not hard when one considers the potato, corn and soy.

Our entire society is passing a tipping point and can no longer to rely on antiquated beliefs.


Anthropologists have found repeated evidence that the whole technology of grain storage, as well as all the evils that come with it, happens way after most of the "civilizing" developments of ancient cultures. Grain has always been a last line of defense against starvation, it is the de facto power and control tool that the exploitative classes wield over the common man, to create long term staying power for societies that have been hollowed out, ransacked and that have become bereft of ecological stability. This prop for failed systems is used when the powers that be begin to find themselves past the climax condition. The list of "professions" that arise from the storing of grain are virtually all of the ones that produce nothing of worth to the average citizen, but essential services to the elite classes. Police provide "security" (order) so that things continue to look "normal". They secure the wealth, but more importantly, keep the rank and file segregated from the wealthy overlords. The counters, who assure that to each is available their "due", the handlers and the taxers, those who dole-out and the receivers who keep accurate records. All of this paid for by a growing portion of the harvest. This is a late development in societies from around the planet. By the time these things get established, the arts are flourishing, music becomes commonplace, rituals are highly refined and culture flourishes, then comes the extractive qualities, the slavery of other human beings and the defilement of the bio-sphere as a sacrifice for commerce.

I used to believe that one day, human beings could live in harmony with the planet and to this end I will continue to speak out in favor of doing just that. A friend embarks today on a new life and lifestyle. she will be giving away one thing on the first, two things on the second, three things on the third etc. for the entire moon of June. I am thinking of trying it myself but I only heard of it a day ago and have not gotten psyched up for such a transformational exercise. I used to think that I had no attachment to things, but I most assuredly do. Much energy has been squandered collecting my obtanium, but without the artistic and transformational energy required, this trash cannot be turned into treasure. Many objects have found their ways to new life because of the give away and the things that I have wanted to create have the right to exist. Part of our birthright as humans is to breathe fresh air, drink pure water and to have healthy land on which to plant our crops and herbs. As much as I am now speaking as a human, the plant kingdom too is served by the realization of their sacred part that needs to be played. our genetics are in association with theirs and it is our right to revel in the sanctity of one another and our unique gifts. The herb and vegetable kingdom stand to gain as much as we do from the rediscovery of our relationship, our understanding and our abandonment to the love we have for one another.

I used to think that doctors knew what they were doing, but they have proven time and time again to be as unaware of their practices as I used to be about using herbs. This for that, this is the way we do it, these are the theories that are important, etc. rote memorization and predigested and unquestioned truths have ruled the day in the medical field for generations. True integrative medicine is less than a generation old, and had only been encouraged by outsiders, but the "traditions" of medicine have been around for several. The killing off of the midwives and the healers of old still affects the stance and slant of all that the doctors have at their disposal. Their magic bullets are always contaminated with unintended consequence and in the end, their tools are poisons and artificialities of different sorts. The biosphere is an intact integrated system in which there is no away and there are no wastes produced. Every creation of nature is shelter or fodder for another trophic level. As we transform our consciousness, we open our bodies, hearts, minds, emotions and spirits to the possibility of a greater future self. Giving our true self a chance to shine is the result of finding out who that is, and trusting that being enough to let them emanate out into the world with the least resistance. This is why I have added herbs and native foods to the list of species, and the forces of nature that I am willing to speak for. blessed be and may you too find your voice! 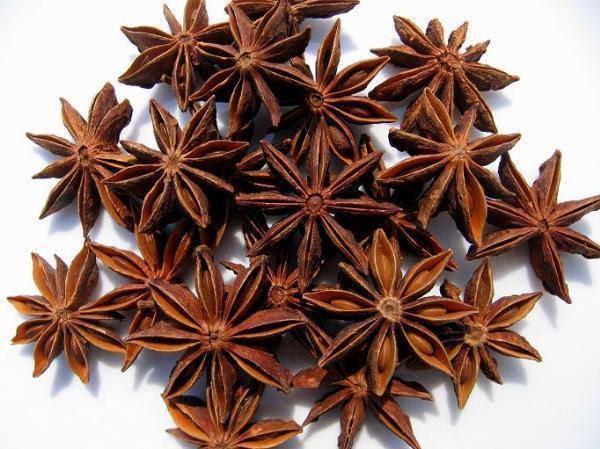 Star anise, a gift to the world...

Posted by Bioneer: Tony C. Saladino at 10:27 AM
Email ThisBlogThis!Share to TwitterShare to FacebookShare to Pinterest