How Do You See The World? 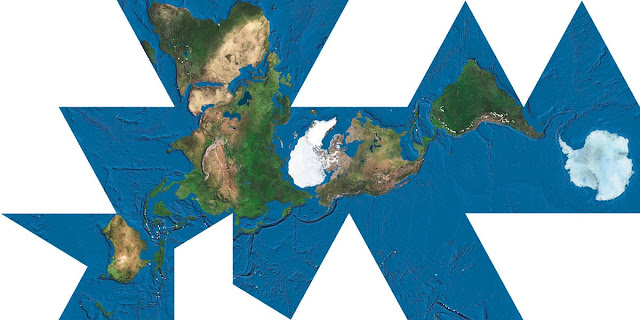 Starship Earth Dymaxion equal area projection. The idea for this image was from the intellectual apparatus of Buckminster Fulller and the image itself was created from hundreds of thousands of images of the surface of our planet and millions of sonar readings. The data contained herin is extremely limited yet the inspiration and development of the map was intended to be the most accurate representation possible in two dimensions. In an effort to keep as many land masses intact as possible, the oceans look distorted. They are not however, to perceive the oceans properly, we must make an intellectual "jump" from one facet to another, ignoring the white triangular spaces that cut through them. The twenty-sided icosahedronis the most accurate description of the globe that we can create on a flat surface. However, even the most accurate representation is not, nor can it actually be, the thing represented.

We all have "maps" in our heads. The lies that we tell ourselves with maps involve lines, regional differences, perceptual limitations, judgements, assumptions and they are often based on what we have been told, how we feel and what we understand about the world around us. No one is immune to the lies that maps tell. In an attempt to represent a sphere in two dimensions, map makers take liberties with the images that we often see representing the planet Earth. For many centuries, humans have gotten around the planet with schematic diagrams. It could be argued that none of has ever had a clear picture of the world we inhabit. Even the photograph or the blue marble that astronauts sent back from space, floating in a black void, even though it has changed the way we see our home planet, is a generalization.

By drawing maps, even of tiny parts of our planet, we are digesting a nearly infinite number of data points and including a miniscule fraction of ones that help us make sense of the whole. I have seen maps that have helped me on my travels that show tiny lines representing fifty foot wide roads as a line, but if you drew that line to scale on the planet, it would be miles across.I have seen representations of the shoreline of a multitude of lakes that eliminate many of my favorite peninsulas and points as well as flooding many of my favorite places to camp along the shore. Even the weather maps that I see nearly daily tell me things that I know not to be true, even the most accurate doppler radar shows shadows and echoes that are not really weather, but the illusion of weather. discreet data points cannot show patterns, qualities of energy that our devices are not calibrated to, smells or the hospitality index of certain places. I have seen maps of energy centers. In fact, I have drawn them, but the crystal clear vision of the world that we think maps can give us are a vague representation of the places we live our lives.

Like the stick figures that children draw, our maps can only be schematic and without putting ourselves into the environment around us, we may never know where we actually are in relation to Mother Earth. I have met kayakers who told me that they had to leave Wisconsin because they knew all the rivers too well. It was no longer interesting for them to shoot the rapids that they had come to know. I still contend that they had not actually "seen" a single one. From their point of view, moving with the current, their intimate map of each river only had the good put ins, deep water, quiet water, drop offs, the giant boulders, dangerous rocks, the haystacks and the long tongues of flow in them. Had they only dipped a few worms or a few flies into the stream, their map may have contained musky, trout or salmon, pike, gar and carp.

I am always interested to learn about the planet we call home. I am open to the ways in which each of us sees the world, but the more I learn about the places that we inhabit, as well as the ones we have left wild, I understand evermore exquisitely that the maps we carry in our minds are uniquely our own. ECO-Tours are designed to help us realize our limited perception and develop our ability to imagine what our planet could become if we just paid it a little more attention.
Posted by Bioneer: Tony C. Saladino at 6:13 AM
Email ThisBlogThis!Share to TwitterShare to FacebookShare to Pinterest